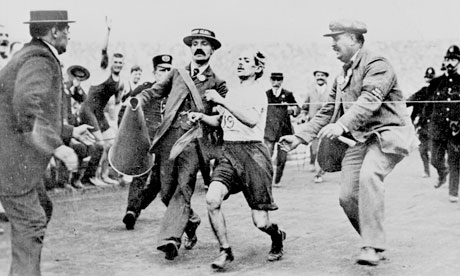 Pietri was born in Mandrio, a suburb of Correggio, but spent his youth in Carpi (Emilia Romagna).
Here he worked as a shop-boy at a confectionery shop. He was 1.59 m (5 ft., 2½ in.) tall.
In September 1904 the most famous Italian runner of the time, Pericle Pagliani took part in a race in Carpi. According to tradition, Pietri was attracted by the event and, still wearing his work clothes, ran to the finish ahead of Pagliani. A few days later Pietri débuted in a distance race, finishing second in the 3,000 m of Bologna.
The following year he achieved his first international success, winning the 30 km in Paris. On 2 April 1906 Pietri won the qualifying marathon for the Olympic Games  to be held in Athens that same year. In the Olympic race he retired due to intestinal illness when he was leading by 5 minutes.
In 1907 he won the Italian championships. He was by then the undisputed leader of Italian long distance races from 5000 metres to marathon distance.
1908 Olympics
Dorando Pietri trained hard for the 1908 Olympics in London.  In a race in Carpi he ran 40 km (25 miles) in 2 hours and 38 minutes, an extraordinary result for the times. The marathon, which was to take place on 24 July 1908, started with 56 competitors, including Pietri and fellow Italian Umberto Blasi. It began at 2:33pm. The weather was particularly hot by British summer standards. The London course measured 42.2 km (26 miles); the distance would later become the official marathon length from 1921.
Pietri began his race at a rather slow pace, but in the second half of the course began a powerful surge moving him into second position by the 32 km (20 miles) mark, 4 minutes behind South African Charles hefferon. When he knew that Hefferon was in crisis, Pietri further increased his pace, overtaking him at the 39 km (24 miles) mark.
The effort took its toll and with only two kilometres to go, Pietri began to feel the effects of extreme fatigue and dehydration. When he entered the stadium, he took the wrong path and when umpires redirected him, he fell down for the first time. He got up with their help, in front of 75,000 spectators.
He fell four more times, and each time the umpires helped him up. In the end, though totally exhausted, he managed to finish the race in first place. Of his total time of 2h 54min 46s, ten minutes were needed for that last 350 metres. Second was American Johnny Hayes. The American team immediately lodged a complaint against the help Pietri received from the umpires. The complaint was accepted and Pietri was disqualified and removed from the final standings of the race.
International celebrity
As a compensation for the missing medal, Queen Alexandra gave him a gilded silver cup. Arthur Conan Doyle had been commissioned by the Daily Mail  to write a special report about the race. He was very impressed by the effort of the Italian at the stadium, which he commented with the words:
The Italian’s great performance can never be effaced from our record of sport, be the decision of the judges what it may.
Conan Doyle proposed the Daily Mail to start a subscription to raise money and help Pietri to open a bakery in his native town. The fund reached the consistent sum of 300 Pounds, to which the same Conan Doyle contributed the initial 5 Pounds.
Pietri suddenly became an international celebrity. ComposerIrvin Berlin dedicated a song to him entitled “Dorando” and Pietri received requests to participate in exhibition races in the United States. On 25 November 1908, in Madison Square Garden, New York  a race between Hayes and Pietri was organized. Pietri won the race as well as a second similar race on 15 March 1909. Pietri won 17 of the 22 races on his tour of America.
He returned to Italy in May 1909 and continued racing professionally in his native country and abroad for two more years. He ran his final marathon in Buenos Aires, on 24 May 1910, where he achieved his personal best of 2h 38min 48:2s.
Pietri’s last race in Italy was a 15 km (9 mi) race held in Parma  on 3 September 1911, which he won. He also won his very last race this time in Goteborg (Sweden), in October of the same year. He was 26 at the time. In three years as a professional runner he earned 200,000 lire in prize money alone, an enormous sum for the time.
He invested his earnings in a hotel he opened in collaboration with his brother. He was not as successful an entrepreneur as he was athlete, and the hotel went bankrupt. He moved to Sanremo, where he directed a car workshop. Pietri lived in Sanremo until his death, of a heart attack, at the age of 56.